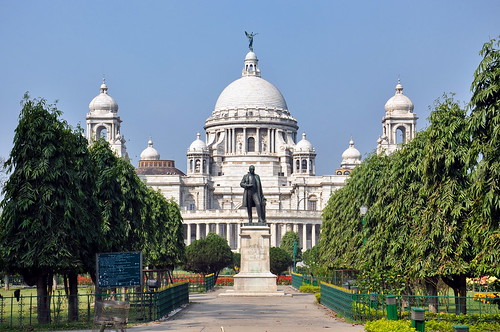 The Victoria Memorial (Victoria Memorial Hall of fame) a large marble building in Kolkata (Calcutta), West Bengal, India which was built between 1906 and 1921. It is dedicated to the memory of Queen Victoria (1819–1901) and is now a museum and tourist destination under the auspices of the Ministry of Culture. The Memorial lies on the Maidan (grounds) by the bank of the Hooghly river, near Jawaharlal Nehru road.

HISTORY
In January 1901, on the death of Queen Victoria, George Curzon, 1st Marquess Curzon of Kedleston and Viceroy of India, suggested the creation of a fitting memorial. He proposed the construction of a grand building with a museum and gardens. Curzon said,

"Let us, therefore, have a building, stately, spacious, monumental and grand, to which every newcomer in Calcutta will turn, to which all the resident population, European and Native, will flock, where all classes will learn the lessons of history, and see revived before their eyes the marvels of the past."

The Prince of Wales, later King George V, laid the foundation stone on 4 January 1906 and it was formally opened to the public in 1921. In 1912, before the construction of the Victoria Memorial was finished, King George V announced the transfer of the capital of India from Calcutta to New Delhi. Thus, the Victoria Memorial was built in what would be a provincial city rather than a capital.

FINANCE
The Victoria Memorial was funded by many Indian states, individuals of the British Raj and the British government in London. The princes and people of India responded generously to Curzon’s appeal for funds and the total cost of construction of this monument amounting to one crore, five lakhs of rupees, was entirely derived from their voluntary subscriptions.

DESIGN
The Victoria Memorial’s architect was William Emerson (1843–1924), president of the Royal Institute of British Architects. The design is in the Indo-Saracenic revivalist style. This style uses a mixture of British and Mughal elements as well as Venetian, Egyptian, Deccani and Islamic architectural influences. The building is 103 m by 69 m and rises to a height of 56 m. It is constructed of white Makrana marble. The gardens of the Victoria Memorial were designed by Lord Redesdale and David Prain. Emerson’s assistant, Vincent J. Esch designed the bridge of the north aspect and the garden gates.

WILLIAM EMERSON
Emerson was a pupil of William Burges and an architectural theorist. He first visited India in about 1860. Emerson designed the Crawford Market, Mumbai (1865); the All Saints Cathedral, Allahabad (1871); and Muir College (1873) Emerson moved to the princely state of Bhavnagar, Gujrat and designed the Takhtsingji Hospital and the Nilambagh Palace. There, he learned to include Hindu architectural elements in his works.

VINCENT J. ESCH
In 1899, Esch was appointed assistant engineer at the Bengal Nagpur Railway, a job which gave him much practical experience in large-scale construction and costings. In 1902, Emerson engaged Esch to sketch his original design for the Victoria Memorial. After designing the temporary exhibition building for the Delhi Durbar of 1903, Curzon found Esch to be a suitable assistant for Emerson. Esch had also won a competition to design the Bengal Club building at Chowringhee and the Bengal-Napur Railway head office building at Garden Reach.

CONSTRUCTION
The construction of the Victoria Memorial was delayed by Curzon’s departure from India in 1905 with a subsequent loss of local enthusiasm for the project and by the need for testing of the foundations. The Victoria Memorial’s foundation stone was set in 1906 and the building opened in 1921. The work of construction was entrusted to Messrs. Martin & Co. of Calcutta. Work on the superstructure began in 1910. After 1947, when India gained independence, additions were made.

EXTERNAL DECORATIVE FEATURES
Atop the central dome of the Victoria Memorial is the 4.9 m figure of the Angel of Victory. Surrounding the dome are allegorical sculptures including Art, Architecture, Justice, and Charity and above the North Porch are Motherhood, Prudence and Learning.

TAJ MAHAL
Emerson may not have taken, literally, from the Taj Mahal but there is a reminiscence. Like the Taj Mahal, the Victoria Memorial is built of white Makrana marble and is a memorial to an empress. In design, it echos the Taj Mahal with its dome, four subsidiaries, octagonal domed chattris, high portals, terrace, and domed corner towers.

EXHIBITIONS
The Victoria Memorial has a number of galleries, 25 in all. These include the royal gallery, the national leaders gallery, the portrait gallery, central hall, the sculpture gallery, the arms and armoury gallery and the newer, Calcutta gallery. The Victoria Memorial has the largest single collection of the works of Thomas Daniell (1749–1840) and his nephew, William Daniell (1769–1837). The Victoria Memorial also has a collection of rare and antiquarian books such as the illustrated works of William Shakespeare, the Arabian Nights and the Rubaiyat by Omar Khayyam as well as books about kathak dance and thumri music by Wazid Ali Shah. However, the galleries and their exhibitions, the programmatic elements of the Memorial do not compete with the purely architectural spaces or voids.

ROYAL GALLERY
The Royal Gallery displays a number of portraits of Victoria and Prince Albert and, paintings illustrating their lives, by Jansen and Winterhalter. The oil paintings are copies of those in London. They include Victoria receiving the sacrament at her coronation in Westminster Abbey (June 1838); Victoria’s marriage to Albert in the Chapel Royal at St. James’ Palace (1840); the christening of the Prince of Wales in St. George’s Chapel, Windsor Castle (1842); the marriage of the Prince of Wales (Edward VII) to Princess Alexandra (1863); Victoria at the First Jubilee service at Westminster Abbey (1887) and the Second Jubilee service at St. Paul’s Cathedral (June 1897). Victoria’s childhood rosewood pianoforte and her correspondence desk from Windsor Castle stand in the centre of the room. Edward VII presented these items to the Victoria Memorial. On the south wall hangs the Russian artist, Vasily Vereshchagin’s oil painting of the state entry of Edward VII, (then Prince of Wales), into Jaipur in 1876.

CALCUTTA GALLERY
In the mid 1970s, the matter of a new gallery devoted to the visual history of Calcutta was promoted by Saiyid Nurul Hasan, the minister for education. In 1986, Hasan became the governor of West Bengal and chairman of the board of trustees of the Victoria Memorial. In November, 1988, Hasan hosted an international seminar on the Historical perspectives for the Calcutta tercentenary. The Calcutta gallery concept was agreed and a design was developed leading to the opening of the gallery in 1992. The Calcutta gallery houses a visual display of the history and development of Calcutta from Job Charnock (1630–1692) of the English East India company to 1911, when the capital of India was transferred to New Delhi. The gallery also has a life size diorama of Chitpur road in the late 1800s.

GARDENS
The gardens cover an area of 64 acres (260,000 m2). They are maintained by a team of 21 gardeners. They were designed by Redesdale and David Prain. On Esch’s bridge, between narrative panels by Gascombe John, there is a bronze statue of Victoria, by George Frampton. Victoria is seated on her throne. She is wearing the robes of the Star of India. In the paved quadrangles and elsewhere around the building, other statues commemorate Hastings, Cornwallis, Clive, Wellesley, and Dalhousie. Approaching the Victoria Memorial building from the south, visitors pass the Edward VII memorial arch. Upon the arch is a bronze equestrian statue of Edward VII by Bertram Mackennal and, a marble statue of Curzon by Frederic William Pomeroy. The garden contains statues of dignitaries such as Bentinck, governor-general of India (1828–1835); Ripon, governor-general of India (1880–84); and Rajendra Nath Mookerjee, a pioneer industrialist of Bengal.

Iconic One Theme | Powered by Wordpress