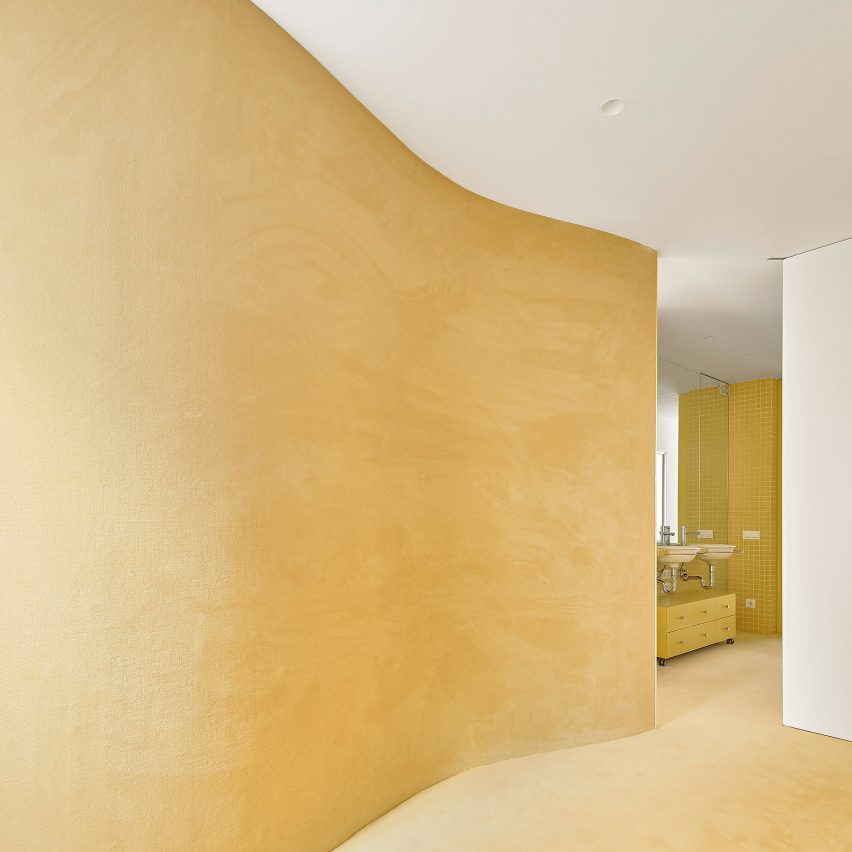 Sunny yellow surfaces feature extensively throughout this duplex apartment in Barcelona, which has been refreshed by local studio Arquitectura-G.

The two-floor apartment is situated in one of Barcelona’s biggest districts, Sarrià-Sant Gervasi, which is populated with stately homes and high-end boutiques. 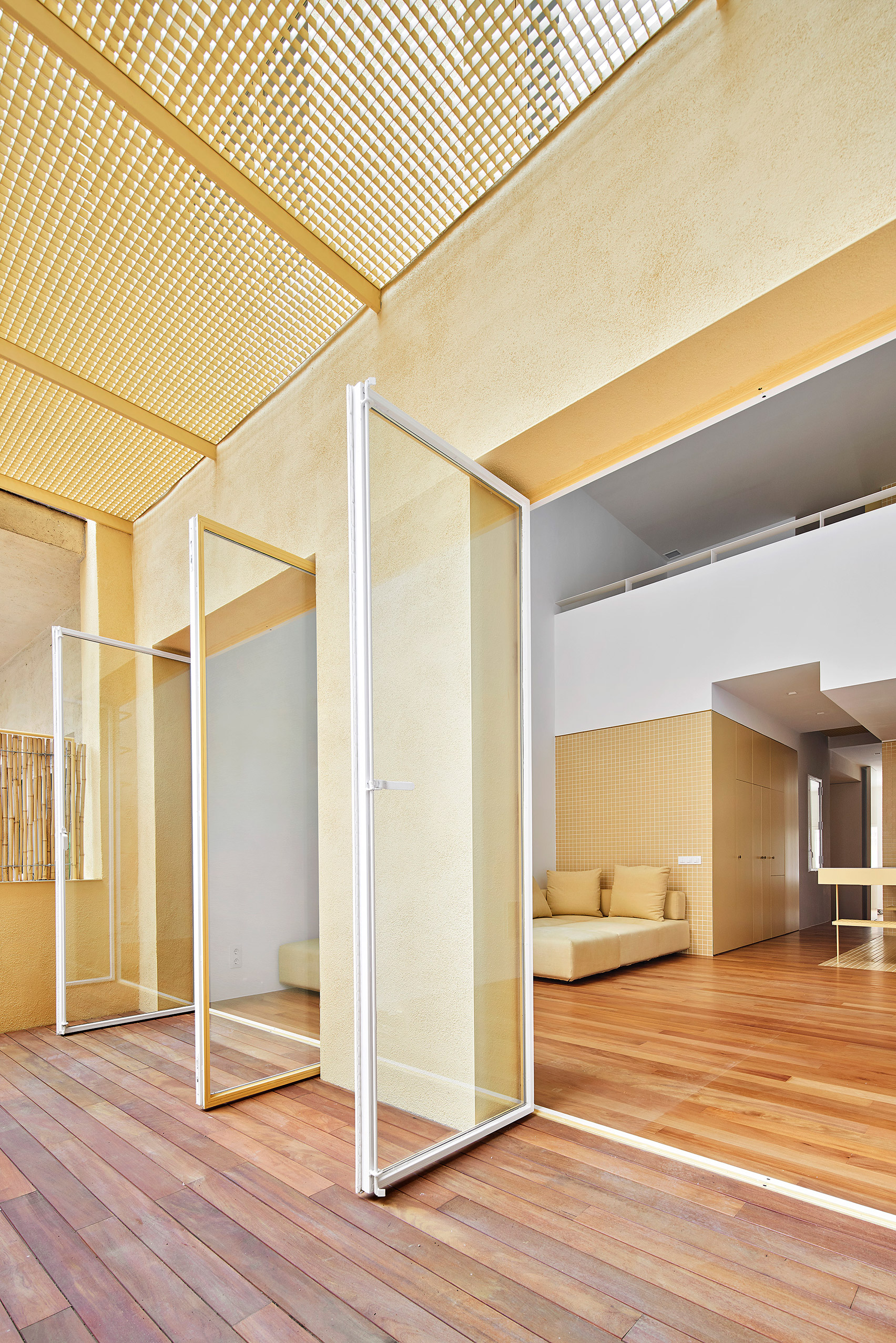 Having grown tired of the home’s convoluted floor plan and shadowy living spaces, its owners tasked Arquitectura-G with redesigning the apartment to make it seem more spacious and bright.

“They simply asked for a traditional program for a nuclear family. They didn’t put any constraints in the design process, nor the decisions,” the studio told Dezeen. 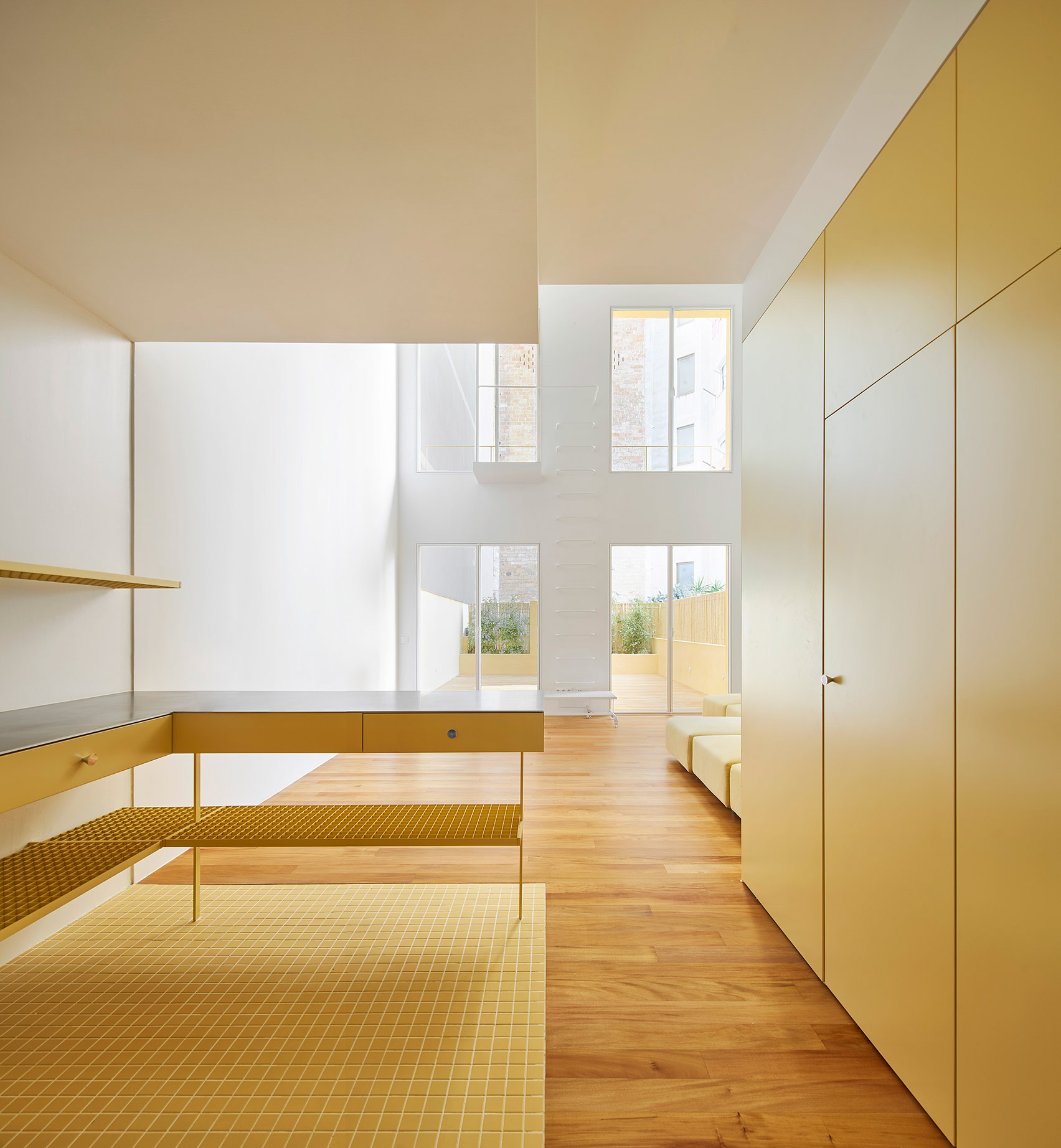 Left with this open brief, the studio made the bold decision to make almost every surface in the apartment sunshine-yellow.

“We looked for a light colour that would brighten the spaces,” the studio explained, “also, this yellow happened to be the colour of the building’s courtyard-facing facade.”

“We prefer to use the same colour in the whole project, in order to give a strong visual impact and make it an essential part of the house’s identity.”. 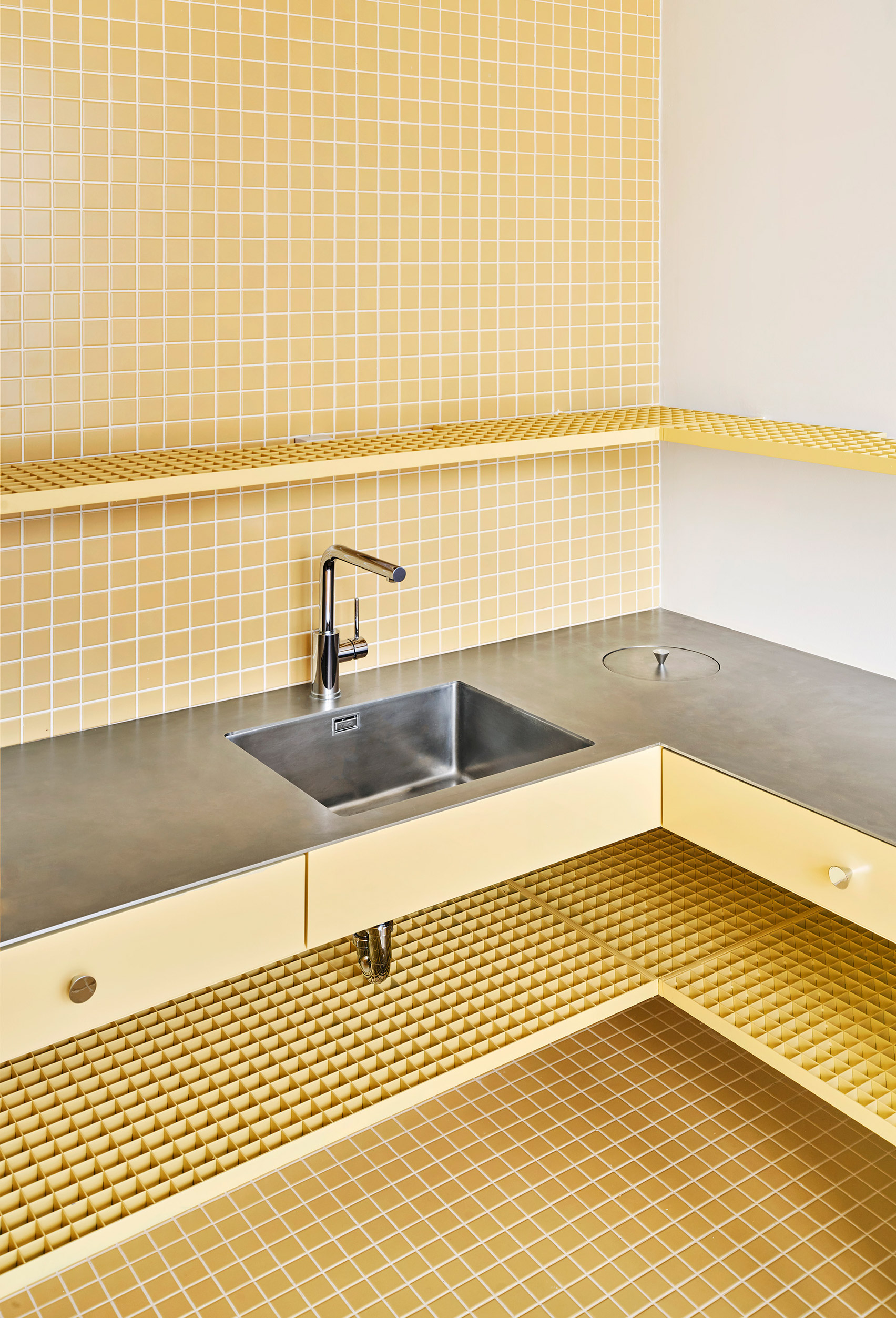 A huge yellow sectional sofa dominates a corner of the apartment’s lower level, where the studio has knocked through part of the ceiling to create an airy, double-height living room.

Glazed yellow tiles have then been used to cover a portion of the room’s floor and rear wall, delineating the kitchen area.

The storage cupboards and shelves here have also been completed in yellow, but the tap faucets and countertops are made from contrasting stainless steel. 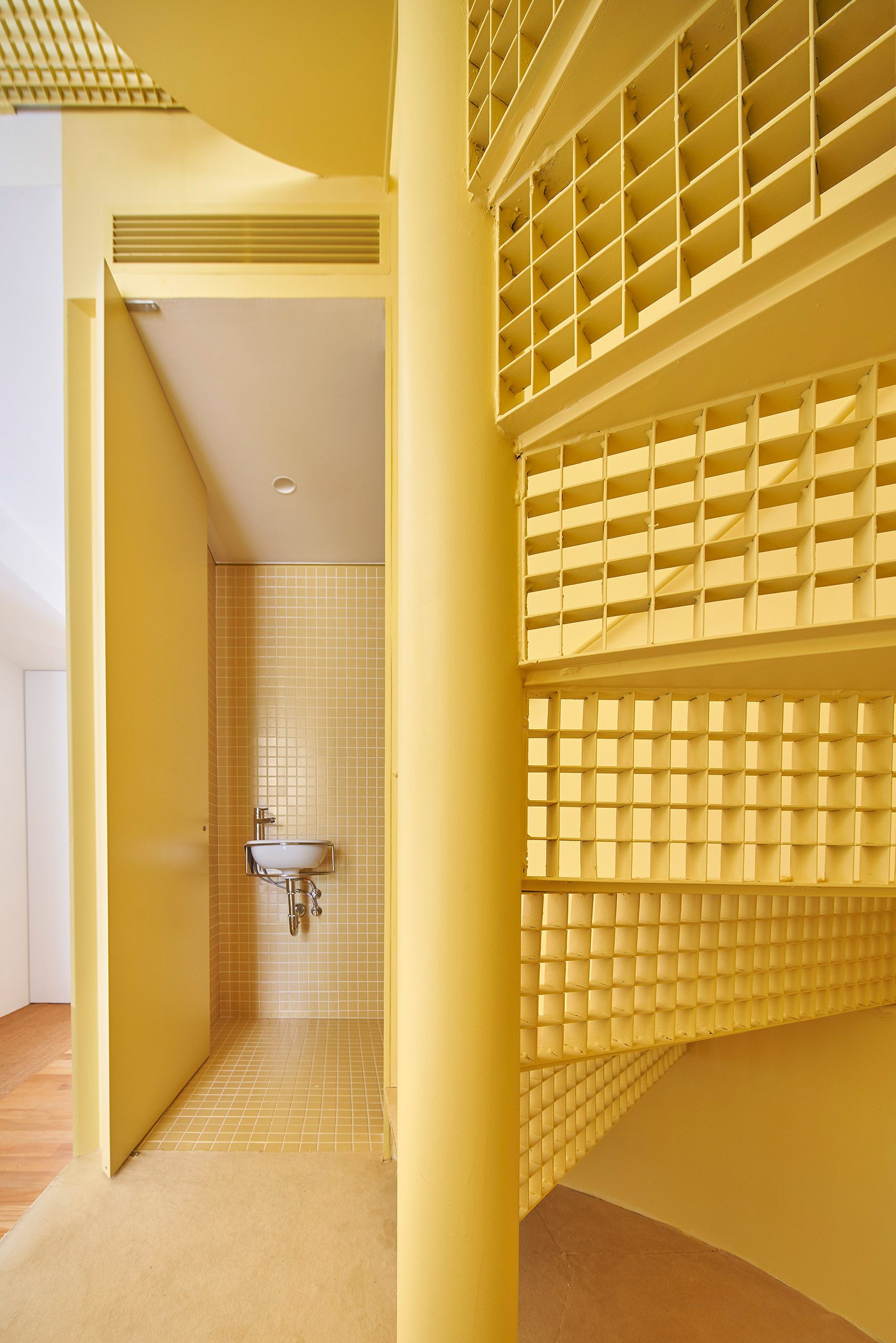 Yellow tiles go on to cover the apartment’s stairwell, which has steps constructed from gridded sheets of yellow metal.

It leads up to the upper floor, which has been completed in the same sunny colour palette. The Brazilian wood floor that features downstairs has been swapped here for comforting yellow carpet. 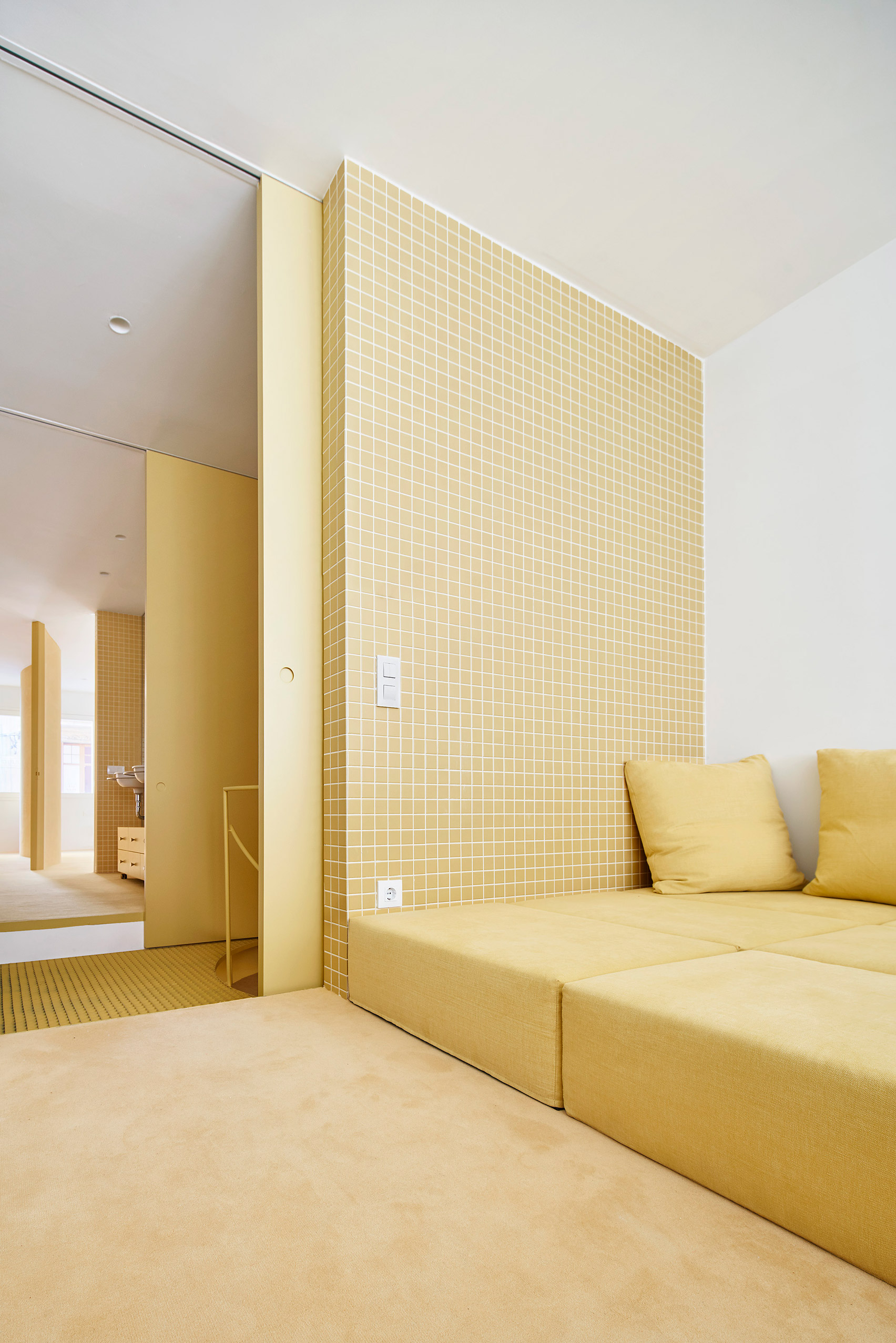 Yellow plaster also covers an undulating wall that offers some separation between the children’s sleeping quarters.

The same gridded yellow metal that features on the stairs has also been employed to make the home’s balcony and to create protective fencing in the small garden. 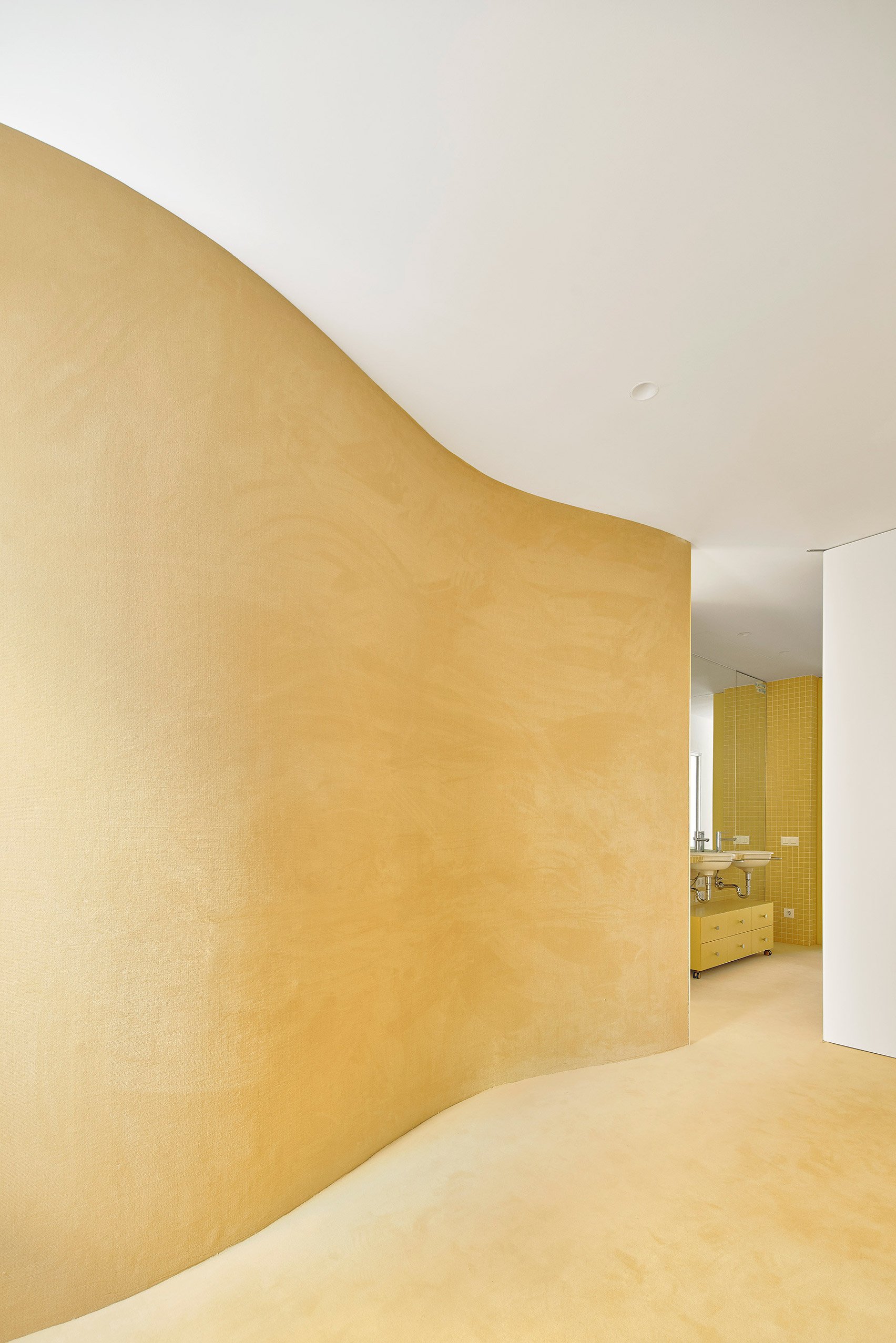 This isn’t the first time that Arquitectura-G has used just one colour throughout a project. Back in 2017, the studio revamped an apartment in Barcelona’s Gracia district, exclusively applying off-white paint throughout the interior.

Five years ago it also overhauled a house in the rural Spanish village of Cilleros, cladding the floors of its living spaces and courtyard in orange-hued terracotta tiles.

Photography is by José Hevia.